My life's decades are the number of fingers on a well-formed human hand, not including the thumb. We could say the last five years ((half decade)) have been the thumb, half-a-thumb, anyway. I pretty much finished off the first four fingers and skipped to the next hand to use the index finger then jumped back to the thumb on the first hand as though an afterthought. These last five years have been opposable. Does that work in this context? Opposable? Do I need to explain? ((Too bad if I do.)) The details of what make this so are... what they are and don't matter other than they make up something that is opposable.
One fifth of one hand standing opposite its fellow digits completes each of those digits and is useless without them. I don't care that you know my age or not, so I'll leave the math to you just for fun. The other odd finger, the index as we mentioned and the only finger counted on the other hand, makes an easier task of moving a few remaining peas with accompanying gravy onto any clumsily-held fork.
Lately I've been noticing more individuals without all their digits. I'm most impressed when they don't try to hide it, but don't make a big deal about it. No etiquette exists, officially, and why should it. I've shaken many hands, or partial hands, and I'm less shocked or taken aback each time a person presents his or her hand as a greeting. Extended stubs, knobs, gnarled and twisted hands and fingers, often result in warmer communications than from the fully-fingered. The stories they tell without saying a word, are epic. I am fascinated, dare I say, gripped.
I met two older gentlemen brothers. They were well older than I am now. Let's just say I hadn't quite finished the decade of my third finger. One of the brothers hands were some of the oddest hands I had shaken, had seen, and at which gestures I marveled. I've got pictures of these guys somewhere I'm sure I will never find under whatever papers in whatever boxes I may never unpack again. But the photos are there. A few were published along with the story I was writing that occasioned our meeting. The photos show two men with hands. As far as I remember, the brother with the deformed hands made no effort to conceal this difference. In so doing he exhibited confidence enough to offer no hint that anything was missing. And so, nothing was missing other than our perception of his missing hand.
His accident, I learned, was from chasing coyotes away from livestock, something he'd done most of his life without mangling his hands. That particular time he must have been distracted, probably overconfident. Long and short of it: he held onto the stick of dynamite a half or even a tenth of a second more than he should have before throwing it. I didn't find out what happened to the pack of coyotes he was after. But by the time we got to this part of his story, it no longer mattered. Neither did it matter what happened to the livestock. Not to me, anyway. ((But I think it would have been pretty cool had he gone on telling the story including the fate of the coyotes. That's pretty hardcore ranching. "Blew the suckers away," he would snort. "Oh, yeah, and my hands, too. Hah, hah.")) His thumb vanished into a pink spray, dissolving into what sure must have been a difficult time of life that squeezed him tightly.
An early childhood memory: playing with fire before the age of accountability. The twins who lived in the house behind my family's house, would meet me at the back fence where our two yards joined. We would bring our plastic soldiers and model cars and whatever supply of flammable liquid (we could get our hands on) and a reasonable supply of matches. This was something we did as naturally and as predictably as the lawns getting mowed and meter readers jumping fence after fence with their clipboards.

The twins brought their older brother this time, and he had a new tool, very cool, very exciting. He pulled out a glass syringe. His father was diabetic. The syringe was an artifact of the day's technology. The clear-glass syringe yellowed as it filled with gasoline. One of the twins scraped a match head and the brother squeezed the inner plunger stick with his thumb, holding the syringe between his middle and index fingers. The fuel, in its narrow and compressed piss-like stream, passed through the flame on that tiny match head and exploded into a fully formed miniature firestorm that would incinerate the little foxholes we'd set up. Plastic green snipers were still being hidden under the plastic army trucks, carefully being placed with my own two little hands. No procedure was in place for an all clear signal, no "fire in the hole!" shout-out.
I don't remember seeing the match getting struck. I do remember seeing the brother dip the syringe into the jar of fuel and then pull back and the plunger. I remember thinking that the flame would probably squirt out of there so fast that it would knock over whatever it hit before it burned it. I also remember an unspoken but certain and urgent prompt to move my hands, to pull them toward my chest. And as though for what seemed no reason at all, I jerked my hands toward sternum as fast as I could. I cannot tell you how close the flames came to nearly landed on my hands. I would be interested in a high-speed film recording of that event. It was, terrifying. It was dramatic. The four of us burst out with unison "wow," or something like that, each remarking how close that was and that we should be careful and all that. But within a minute our young brains had moved on to other distractions, still in need of further exploring, discovering limits we had long passed while looking for things that our two hands could do.

The Fog of Boredom

Boredom is not necessary, neither is it illegal. Resorting to subjects, verbs and objects that are illegal often serves as boredom's potent antidote. For a while, anyway. Until one becomes bored with whatever illegal activity, hormones will surge, chemicals will churn life into the dull grey soft matter that is the hardware of consciousness. We are children squishing ants on the front porch. Nothing wrong with that, even kind of addictive. And it never gets old until we do.
Let’s turn things up a notch. That bird over there needs a rock thrown at it, we think, and throw one in its direction not intending to hit the target, which it does. The sparrow falls quickly, unaware of how or why or even that it has become acutely inert.
A few years later another juvenile ensemble has assembled, waiting to pounce. That kid with the new bicycle (sweet tufted banana seat, suicide handlebars, nothing but chrome for fenders) sees them staring at him. He innocently leaves it unlocked in front of the drug store. The glass door doesn’t even shut before one of the boys mounts the stingray and flies it to the next neighborhood. Hey, it’s something to do. The dork comes out holding a candy bar he will never eat. Sick with loss, new emptiness where his new bike was a few minutes earlier, safe, solid and real, all his, suited to no one else. How dare anyone ride it but him. He must walk the city block to his home. It’s a joyless hike, the distance compounded as barefooted forced march. The void that is his loss weighs on him brutally. That fine machine, the envy of the other boys, the most significant physical extension of his personal identity, the thing that got him from place to place in style, gone.
The dork rides shotgun as his father steers the Impala through the neighborhood streets. Decades will pass until father and son both relive these moments in dreams they never share with the other. It never occurs to either of them as they reflect on this memory, a horrible experience transformed into a sweet recollection, time together, so long ago. And there it is: the stolen bike, still recognizable under the all the disguise from a hasty black paint job. The thief later becomes a friend.
He remembers the time he returned to check on the carcass of the fallen sparrow a few minutes after he’d killed it, but it was gone.

gargoyle not from pottery barn

It wasn't a squirrel. It was a gargoyle, I could tell the difference easily. I fell in love with it immediately. What a concept. Who would have thought of placing a gargoyle at the edge of a roof about thirty feet above a suburban lawn? Perhaps a gargoyle would think to do so. More likely the gargoyle would do so without thinking. What thought was required? Just do it. It's the natural thing. Which is probably why our gargoyle looked so naturally positioned. 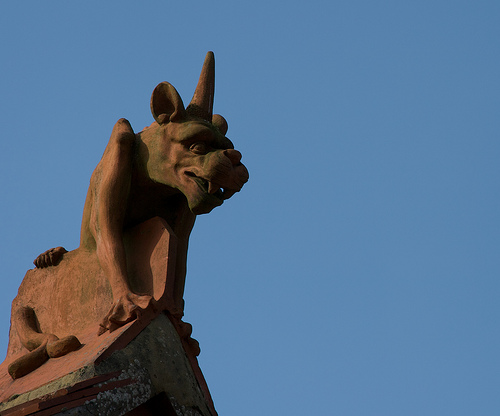 He is not of clay or plaster, we have learned. And we have named him Vesparo, not knowing his real name or if even he has one. He answers to Vesparo and he eats the handbills, circulars and advertisements left on our porch and lawn. To our knowledge he does not eat those who leave the handbills, circulars and advertisements left on our lawn. Vesparo is close to the family of geckos who congregate on our porch ceiling. They get on well, joking and playing games into the early morning.
So, when I tell everyone we have a gargoyle on the roof of our house in our quiet suburban neighborhood, how nice, they must think, for this time of year, all hallows and all that. But, no. This is the real thing. I don't think he's going anywhere. We love him, Vesparo. He is real. He is very much alive, as are, as far as we know, all of the children who live on our street and in our neighborhood.

A-Rod, a strike-out before the strike

The radio said a Cessna made an emergency landing

ont the same side of the freeway I was driving on

minutes earlier. This happened in Gallup

on the way to Salt Lake City from Dallas. So,

I have convinced myself I can make something of it

because one can take such liberties in poetry, the way a gull

dives for food at the stern of a ferry

while crossing the bay. A similar thing happened

five years later while driving back from cold nights

in San Francisco, the sea made me homesick

for the coast of Texas, Baytown, where I cut my foot

on the beach. There, I saw two men pulling

a sack of seaweed from the water. A boy my age

had drowned. The undertow, brought him there

from a mile away. He shouldn't have been out anyway,

the water was too cold. He was only doing what I would have

had I not seen him blue and swollen.

But I cut my foot and left a thread of blood

to my aunt's back porch. She told me to wade in the ocean

because salt water was good for hurts.

The water was too cold that day, I said.

And so, driving back from San Francisco I saw that Cesna

parked on the side of the highway like it belonged there.

And there was no news of it, because the night before

John Lennon was murdered; the radio played nothing

but his music and talk of his death.

Soon south of the Great Salt Lake, the smell

made me think of where I had been the day before.

Then, the radio said something about a Cessna

making an emergency landing. It was too cold

that day for wading.